Self-Care for STRENGTH and COURAGE: Bringing About Change in a Changing World 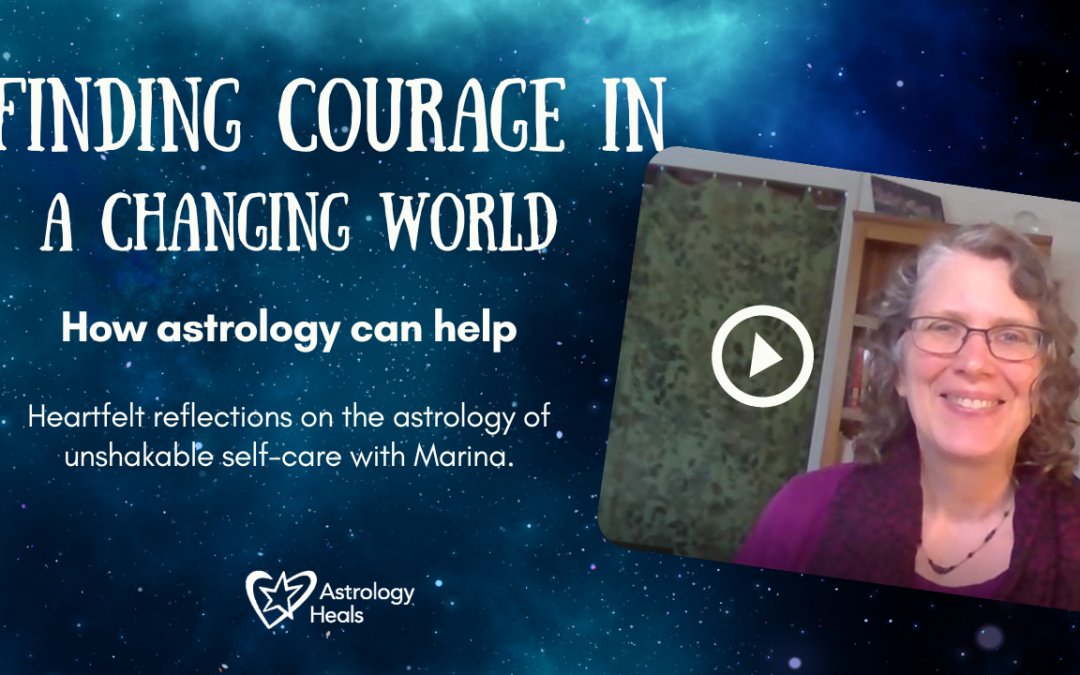 Transcript of Self-Care for STRENGTH and COURAGE

Hey everyone, greetings! I’m Marina Ormes, the founder of Astrology Heals at astrologyheals.com and I wanted to talk to you today about what’s going on in the sky.

I came on last week and gave you some insights into what happened on the day of the school shooting in Texas. And we’ve got some of these Aries energies up now with Jupiter in Aries, and also of course now we have Mars in Aries, and Mars is conjunct Jupiter.

I talked last time about Mars going into Aries to join Jupiter and how those were, kind of, some activating or triggering events for the eruption of particular energies.

So certainly in the, you know, in the immediate local experience for the folks going through the event in Texas, it was profound and just incredibly horrific and tragic.

And of course in our own lives, for the rest of us, we’ve been impacted by the awareness of that event in the news as well as other things that are going on and things that may be going on in your own life that are getting activated by that Aries energy with Mars passing by Jupiter.

So remember, Jupiter makes everything bigger. Everything that it touches just has this feeling of bigness, and it affects our beliefs and our ability to trust and things like that.

And with the forward movement of Aries, we also have the energy of action and of courage… needing to find our courage, take risks and put our own bold actions into the things we believe in, which is also Jupiter—and bold action is Aries—and, especially with Mars—the planet that rules Aries—Mars in Aries.

So we’re being asked on an individual level to look at our own lives, our own selves… where we need to take action, what we need to do, where we need to be bold, courageous, take risks and stand up for the things that are important to us.

And so, that’s certainly coming up for all of us, and also as we make those decisions and take action. There is this quality to it that is not necessarily thought through, right?

So that… Aries… is the energy of the fool, and Mars is the energy of taking action without thinking things through necessarily. So we also find ourselves bumbling a little bit, and stumbling, as we find our way… as we need to just do something, even though we aren’t sure yet what that something will ultimately look like, or become.

So that is happening. We’ve also got Mercury, which just stationed direct from being… from its three weeks of being retrograde. And then Saturn, a day later, stationing to go retrograde from being direct so that both of these planets—Mercury and Saturn—are in a square in the sky… meaning they are 90° apart from each other in that circle of the zodiac, the wheel of the zodiac.

They are hovering in a greater intensity as they form that square, and this brings the energy of communication, of information exchange and idea processing, which is Mercury… and then the energy of Saturn, which is our confidence, our backbone, our foundations… the ability to plan and think things through and build structures and think long term.

Saturn is also a sense of responsibility, a sense of duty. So we have this activation of these energies of how we think about things, and the conflict between the past and the future… for multiple reasons.

With Saturn in Aquarius and Mercury in Taurus, we have sort of a clashing of the energies of where we’ve been, compared with what we are becoming… or what we can become or step into.

So we’re having this impulse to expand into new ways of being, new qualities… rebelling against the old. And to put that into action, into creating new structures. But again, there’s this… with all the Aries energy that’s up, there is this feeling of kind of bumbling through it, of trying things, but not really being sure how it’s going to end up.

Movement is Good, Even if it’s Awkward

The best way to work with these energies that are coming up right now is to go ahead and recognize that you are bumbling through things and that it’s good to move. Movement is good, even if it’s awkward, even if it’s uncomfortable, even if it pushes you into places that you weren’t expecting to go.

That movement, that action… it is really important to continue this work that we’re doing to break the foundations of the old ways of being, to break out of old constructs, old restrictions, old limitations, so that we can continue this work of creating the future, of laying the foundations of new ways of being, of opening to new possibilities and infusing ourselves with new ways of being that allow us to navigate… in the ways that we are evolving into, as opposed to what we know from the past.

That’s going to be awkward. It is going to be uncomfortable because it is not necessarily what we know, and that’s important. That’s the nature of it, so good job doing this work.

We are in a Gemini Moon cycle with the Gemini New Moon from a few days ago. And that is unfolding as the Moon waxes toward the Sagittarius Full Moon.

We’re in this Moon cycle that is about asking questions, opening, having an open mind, a mind of wonder… asking questions, looking at things more deeply, inquiring, and having a healthy sense of questioning the status quo and your own assumptions.

Thanks so much for watching today. I’ll be back with you with more videos. I would love it if you can help me out by subscribing to my YouTube channel and I will reward you with my best content here and keep sharing what I’ve got to offer about how the planets can help you navigate the times were in and help you to continue to make the most of the energies and the qualities that we have available to us.

Thanks so much for watching. Check me out at astrologyheals.com and I’ll see you next time. Bye for now!