Astrology Themes for Our Times: The Jupiter Neptune Conjunction 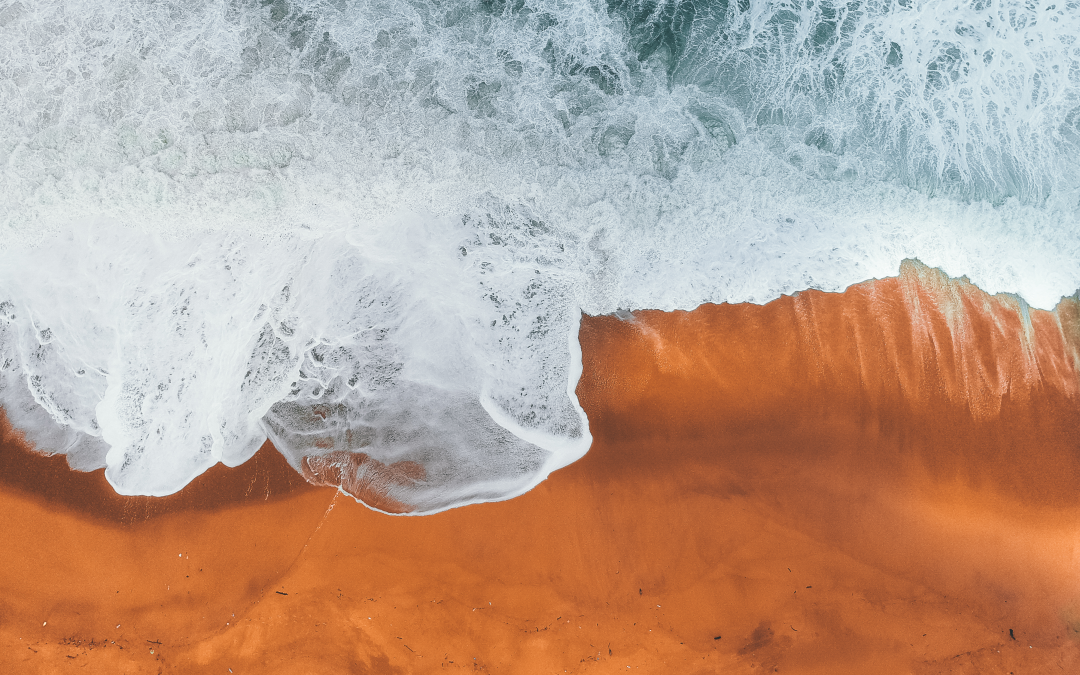 How to avoid the pitfalls of confusion and delusion, and harness the highest possibilities of dreaming and imagining a new future. 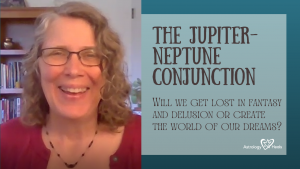 Transcript of Astrology Themes for Our Times: The Jupiter Neptune Conjunction

Hey there! I wanted to shoot a quick video for you about important upcoming transit. Or we may be past the transit at this point, depending on when you are watching this, but on April 12, 2022 there is a significant alignment of some outer planets and it is one of the more determining alignments of the year 2022.

As you know, each year has its particular themes that have to do with what the outer planets are doing and how they are bringing in the energies, or the themes, of what the year will be about and what we’re dealing with.

And this one is interesting because it is Jupiter—the planet of expansion and abundance, and belief and what we believe, and what we place our faith and trust in—and it is in the sign of Pisces. And it is going to be meeting up with the planet Neptune, which is about the great ocean of being.

Neptune is the planet of spirituality. It is the planet of transcendence and unity, of interconnectedness. That can bring up themes of empathy and compassion, feeling that sense of being connected to others in a way that is unifying, where we are all one. And at the same time, it can be dissolving—of a sense of identity or a sense of uniqueness—because it’s that feeling of belonging to a bigger ocean of being.

With Neptune in Pisces, where… well, Neptune has been there already for several years. We already have Neptune going through its own sign of Pisces, which is the sign or the quality it gives to the planet Neptune.

It is the quality of dissolving, of dissolution, of transcendence… but also of losing touch with what grounds us, what contains us, what gives boundaries and structure to our lives.

And so both Neptune and Pisces dissolve the boundaries, the guideposts, the fence, the guardrails, they take away whatever it is that is holding things. The structure or container is being dissolved by these qualities and the quality of Neptune going through Pisces.

So that’s been happening already for several years. And that brings the energy of losing touch with reality, of illusion, of disillusionment, of dissolution and confusion… all these things that kind of feels like a feeling of a fog coming over us where we can’t see anymore.

We lose our sense of direction and our sense of where the fence is or where the signposts are telling us to go. All that disappears into the fog, and you are left feeling confused.

So that’s the general quality we’re dealing with, and we see that showing up in terms of themes in the news, like fake news, lies being told, official lies, the “big lie” … about lies and being lied to, about illusion and what it is were being told, about reality and what is reality. There is a sort of losing touch with how things previously had clarity, like, “I know how this works. I know what to do. I know that when I go to the store XYZ thing is going to be on the shelf for me.”

There is kind of a loss of that sense of what we can count on, what we can depend on. And there is this potential to get lost down trains of thought that are confusing or delusional or not knowing what reality really is.

Those are the lower possibilities. And higher possibilities with Neptune in Pisces have to do with getting in touch with our heart, with tapping into a bigger picture of spirit, of that feeling of interconnectedness, of shifts in consciousness that really take us into a more expanded unified place where we’re listening to spirit, where we’re in connection with the bigger picture of truth.

And the work is, the lessons of this time are, to get in touch with bigger possibilities for reality and to bring those into being and to create new guardrails, new boundaries, new containers, new structures that can embody this bigger sense of… a bigger picture of truth, a bigger way of being connected, of being guided by a bigger picture.

So dreams… you know, there is a theme of having a dream of what is possible and making that something that you’re working towards, putting your energy into, making, that takes shape. That’s a really positive thing to do with this time.

So what’s going to happen as Jupiter passes by Neptune? Jupiter in Pisces does not last as long as Neptune in Pisces. Jupiter moves a little more quickly. It’s going to move through Pisces in a few months, and it’s going to pass by Neptune and then it’s going carry on in its journey into Aries.

But while Jupiter is in Pisces, we do have this enhancement of this energy that is confusing, delusional, that brings a feeling of uncertainty or not knowing… like, “where is the road, what are the signs telling us, what are the boundaries, structures, and the containers?”

And as Jupiter comes in, it brings expansion to those energies. It is making it grow bigger. It is becoming bigger than life. That is the theme of Jupiter—to expand, to become bigger than life, to outgrow its boundaries.

So yes, that brings all these things together with this potential for illusions and delusions, confusion, propaganda, alternate realities, new claims to truth that are not grounded in logic or facts… but is “true because it’s true, because I said it’s true,” right?

“It is true because I’m going to repeat it over and over and over until it becomes true,” in that kind of Orwellian way that we’re experiencing things, and the human evolution… in the collective.

And so with Jupiter coming through on April 12, with this Jupiter Neptune conjunction, be aware, beware of your own potential to get lost, the potential to go down a path, or believe something that is not grounded in fact.

Make sure you connect with some basis in grounded reality, touching and checking in with your friends, you know, “is my thinking clear about this? I want to get your perspective.”

Find ways to create new containers that can truly hold the vision of what it is you want to create, that dream. Jupiter is also about beliefs, and Jupiter going through Pisces and past Neptune is going to be and is an opportunity to transform your beliefs, to take them to a higher level.

It’s a good time for actually looking at: how is what you experience based in your beliefs? How are your beliefs determining the way that you experience reality and how can you shift into new beliefs? How can you bring in beliefs for yourself that hold the bigger dream, bigger vision, of what is possible, and to expand into the dream, into the vision, into the infinite space of possibility that is available to us right now?

When I say beliefs, that’s not just… you know, it could be religion, right? It could be a philosophy, a way of thinking. But also look at your own personal operating system. Look at how it is that you frame things.

You can identify your beliefs by asking yourself:

And then, can you take a step back from the way that you understand it to open to a new possibility coming through?

Doing this can help you to create a container and a shape and form and structure that you could only imagine previously. Or maybe imagine something that is beyond the imagination of the past, and move into what we can imagine for the future.

So we have the pitfall, the potential, that we should watch out for, which is that we can lose touch with reality. We can be persuaded or become victims of lies and propaganda.

We can be manipulated through those kinds of deceptions OR we can take charge and ask ourselves:

And then, ask yourself, “How do those things that I imagine need me to embody them through my beliefs, and my beliefs about what is possible, so that I can be an active agent in shaping a reality that I can really feel good about?”

So, that is the essence of the Jupiter Neptune conjunction exact on April 12. It’s active for months before and after, but during the month of April is really heightened and most intense.

I hope that’s helpful for you! If you are looking for deeper insight into your own chart, I’m really excited to let you know that I now have mini readings available.

You can find out how this Jupiter Neptune conjunction shows up in your own chart, how to work with the Moon cycles that we’re in, or any Moon cycle, and you can get a recorded mini reading on how that shows up for you.

Just go to astrologyheals.com and on my Work with Marina page, it will give you instructions for how to do that… how to get your own mini readings recorded and sent to you, so I hope that’s helpful.

I hope you enjoyed it and let me know what you think! Please subscribe and like and then you will get to see more and so will more people. Awesome, all right, thanks for watching! Bye for now.