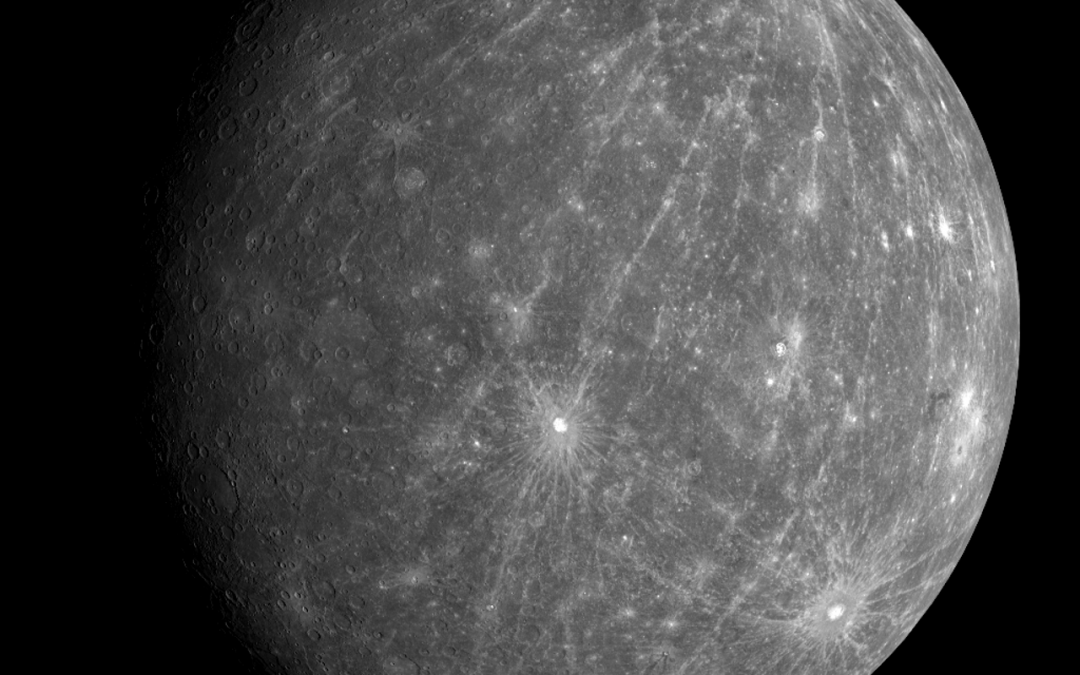 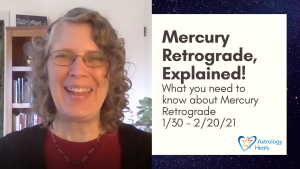 Hello, thank you for joining me! I am Marina Ormes, the founder of Astrology Heals at astrologyheals.com.

I am the author of these two books, Astrology Heals and Cycles of Healing, both of which are about how astrological cycles and energies describe our own ongoing healing process both on a personal and a collective level.

They reveal how we can work consciously with the cycles of astrology to support our own healing and growth in manifesting what we want, including our vision for the future.

And we have a very Aquarian year this year, so vision for the future is what it’s all about!

That’s like the theme of this year… so it’s good to think about how we can align with these energies positively.

But what I want to talk to you about today is Mercury retrograde.

We’ve got Mercury going retrograde on January 30 and it will be retrograde until February 20.

What a planet being retrograde in astrology refers to is that it appears to be moving backward through the zodiac. The zodiac, of course, is the experience of the sky as we see it from here on earth.

The zodiac belt is the belt, or the circle, around which we see the planets move. Of course we know that the planets are moving around the Sun, the planets orbit the Sun. We figured that out a few centuries ago, but we still have a zodiac that only exists from our perspective here on Earth.

The Earth is Moving Too

So even though the planet Mercury never goes backward in its orbit around the Sun, because we are on Earth—which is also a moving planet—we see it moving backward.

The zodiac is the circle that describes the path of the planets, and that includes the Sun and the Moon in addition to the planets that orbit the Sun.

That means that Mercury will be covering some territory that it has been through already in recent weeks, and it will cover that territory forward and backward and forward again.

When people talk about the Mercury shadow, that’s what they’re referring to. They are referring to the time when Mercury is no longer retrograde but is still going through those degrees that it has already covered.

Mercury goes retrograde or backward and then it turns forward again. That’s all going to happen… mostly in February 2021 but it begins on January 30.

Mercury is the planet that has to do with thinking, communication, and networking.

When we in modern times think about communication, for the most part we’re thinking about our phones and our computers so that’s how we do our networking these days.

So we’ve got the experience of communication being muddled, and that means our technical devices that communication goes through sometimes need some attention, right?

They break down or the glitch out or something happens because communication is not moving forward during a Mercury retrograde.

During Mercury retrograde, communication is actually needing to go inward. It’s a time of review and reflection.

When Mercury is retrograde, it’s important to think about your backups. Do your computer backups, but also maybe don’t rely so much on your devices and or have a sense of humor when things don’t go smoothly, and also have a backup plan.

That way, you can avoid escalating any frustrations or challenges, but address them and have them be something you can laugh at, right?

Back Ups and Back Up Plans

The other thing that’s happening is that communication may not be going through, so what you thought you said might be different than what someone else heard or vice versa. So it’s a good time to not only do your backups, but also to check, you know, “okay let me just double check our agreement, let’s put it in writing here, let’s make sure that we both heard the same thing. Let’s double check what we are planning to do.”

When you do that you just can cover all of your bases so they also say to double check your travel plans or your reservations. That is if you’re having any travel plans right now, of course, many are not.

But double check your communication and it is a good time to give attention to things that need some extra time.

It’s a good time to give attention to your inner communication, so a beautiful time for journaling for brainstorming for playing with ideas on paper’s penciling it out. It’s a good time for sketching things out or thinking them through.

That’s perfect for Mercury retrograde and then, again, just make sure that you got it the way you wanted and that when you input the data or you convey it to another person that they heard and understood and you’re on the same page.

So that’s Mercury retrograde, and with Mercury retrograde in Aquarius—again, so Mercury is about communication and networking and Aquarius is about higher level thinking and thought processes that are outside the box, so it’s a good time also to clear space.

Clear your mind. Empty your mind and open space so you can be receptive to insight and inspiration.

It’s a good time to go on a walk to just clear the clutter of your mind, space out or stare out the window, you know, have those wonderful shower epiphanies, the epiphanies that you have while you’re in the shower.

That’s what this Mercury retrograde is going to be good for and so again, adjust your expectations. Make sure you’re backing up and double checking and you should be fine.

All right, thanks for watching! Check me out at Astrology Heals. You can check out my books there, and we have natal reports available on my website. I also have an ongoing membership program, or you can schedule a private session with me. I offer many different ways to work with me.

Thanks for watching, I’ll see you next time.