What Do Eclipses Mean in Astrology? 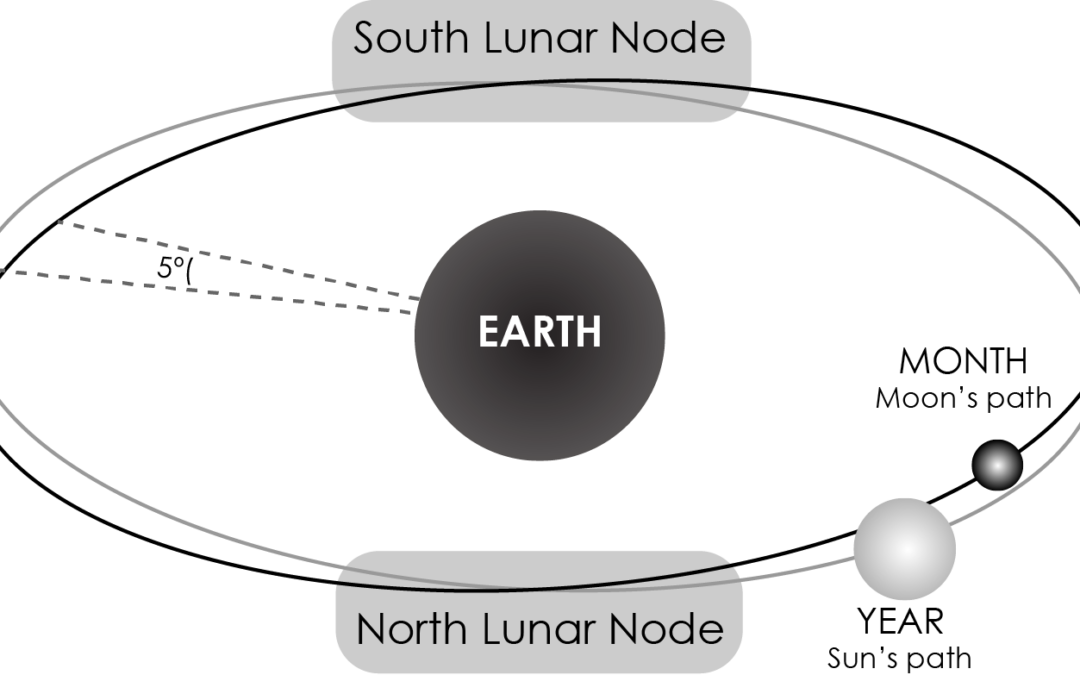 Transcript of What Eclipses Mean in Astrology 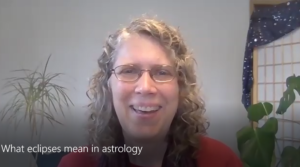 Hello! I’m Marina Ormes, the founder of Astrology Heals. You can check me out at astrologyheals.com.

Today I want to talk to you about eclipses. What do eclipses mean in astrology?

What is an Eclipse?

You’ll notice that we have a New Moon and a Full Moon on a 28 day cycle, approximately, but we don’t have an eclipse every time there is a New Moon or Full Moon.

During a New Moon what’s happening is that the three bodies are also in alignment, with the Moon passing between the Sun and the Earth in its orbit.

A New Moon or a Full Moon happens about every two weeks. Then we also have the fact that the Moon is orbiting the Earth in a plane that is slightly different from the plane of the Earth’s orbit around the Sun.

There are going to be two points in the Moon’s orbit where the Moon crosses that plate, the plane of the Earth’s orbit around the Sun. When a New or Full Moon happen during the time when the Moon is crossing that plate or that plane, that’s when we have an eclipse. That?s because the Moon is also falling in line such that it actually blocks the light of the Sun in the case of a solar eclipse or the or the Moon is passing through the Earth’s shadow in the case of a lunar eclipse.

What Do Eclipses Mean in Astrology?

That’s what creates an eclipse. So for astrologers, not only do we have a New Moon that is in the same degree of the same sign as the Sun, we also have the addition of this further alignment.

Not only do we have the three bodies in the line, but we also have that line in the same plane, that three-dimensional plane. When that happens it’s like things are? it’s like a piece of the puzzle is clicking into place. Something is lining up that clicks and that opens a kind of an energetic gateway.

During this energetic gateway, powerful things can happen. Eclipses and the energy of eclipses tend to be times of transition, shift, and new awareness of something coming and something going. Something is changing. Something is coming into your awareness that wasn’t there before or something different that you need to adjust to.

Eclipses Bring a Potential for Breakthrough and Healing

From my perspective, in the way that I do evolutionary and transformational astrology, we look at what evolutionary possibilities are available with any particular astrological alignment. With eclipses I would say that whatever is happening is always an invitation for you to learn something.

There is an option of healing something that allows you to be more effective in your life?to experience the things you want: more joy, passion, abundance, or the ability to move and act. When those eclipses are present there’s an extra wave of energy ready to carry you to your own next level of possibility.

That’s what is coming your way when we have eclipses, when we have a series of eclipses there tends to be some shift and movement. It is inviting you to step into a higher level of possibility for yourself: for what you can manifest, how you can experience healing and clearing old stuck patterns or old old ways of being that are not working for you anymore.

If you’re stuck, for example, in a pattern of not making enough money or not finding the right relationship, these are invitations to step into a more functional experience?more abundance, a more flowing experience of having what you want.

Of course as human beings when we don’t have what we want we are being invited to learn something about who we are. How do we organize ourselves, rally ourselves to rise to the challenges that are before us? How do we learn whatever the stress or challenge is inviting us to step into and learn?

That is what an eclipse means an astrology. Of course every individual eclipse has its own specific meaning depending on where it falls and what is happening with the other planets.

I hope you’ve enjoyed this and you can learn more about what I do on my blog astrologyheals.com/blog. I’ll see you next time. Thank you so much for watching, bye for now.